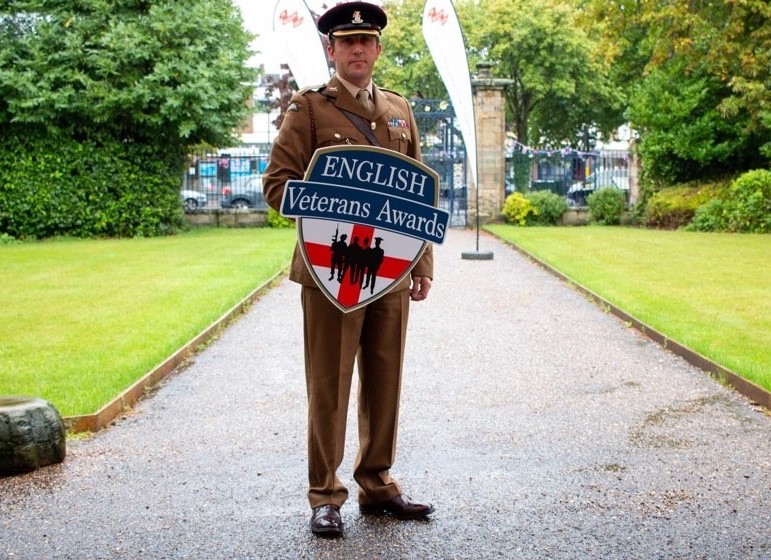 FDM Ex-Forces Consultant Andrew Lawson is one of the shortlisted for the Reservist of the Year category at the English Veterans Awards, taking place in September 2021. These awards aim to recognise the achievements of Armed Forces Veterans and Reservists and celebrate their inspiring stories.

Andrew joined the Army Reserve in 2019 following on from a 20-year career in the Regular Army, albeit with a 3-year gap. At the same time, he also joined FDM on our Advanced Course and was soon able to secure his first placement with a leading distribution company in the UK. Today Andrew works as a Security Project Manager for a major government body.

"Both the client and FDM were exceptionally supportive of my Army Reserve service. I was given command of a rifle company in the 4th Battalion Yorkshire Regiment based out of Hull. Over my first year with 4YORKS, I completed numerous 'green' training exercises, mostly on weekends, commanding various offensive and defensive infantry skills and range work conducting live firing of the Army's most up to date weapon systems.

As the COVID-19 situation started to escalate through March/April 2020, I was mobilised back into full-time service with the Army to provide whatever support was needed to assist the NHS, again fully supported by FDM and the client I was placed with. The Battalion was then allocated to coordinate the military contribution to COVID testing and support the NHS and local authorities throughout Yorkshire and the North East. I was given command of 65 soldiers whom I split into four operating platoons, each then became an individual Mobile Testing Unit (MTU).

Over the remainder of my 3-month mobilised service, I continued to command and coordinate the activities of these four MTUs, where we would set up mobile testing sites along the East coast from the Humber up to the Scottish border for anywhere between one and three days. The soldiers were excellent at the task and in dealing with the general public, who had many concerns at this time. It was undoubtedly a different operation from ones I had deployed on previously to Bosnia, Iraq and Afghanistan. Still, it was nonetheless incredibly satisfying to be able to add real value to the national effort."

On behalf of FDM, we would like to thank Andrew for his involvement in protecting the community during the pandemic and we wish him the best of luck ahead of the award's final in September. To find out more about the career opportunities we offer to individuals who have served in the armed forces, check out the FDM Ex-Forces Careers Programme.