ACCEPT ALL REJECT ALL CLOSE
26 May 2022 Preeta Ghoshal 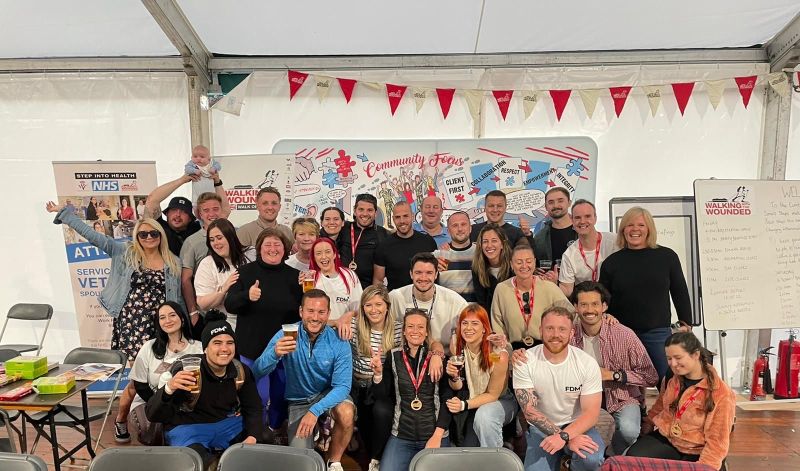 Eleven teams from FDM travelled to the Lake District for an arduous trek to support a wonderful cause. Read our adventures!

Every year for the last seven years FDM-ers from across the UK take a trip to the Lake District. Once there, we soak in the rugged beauty of Cumbria, and undertake a trek that takes us over and along the sweeping hills of Grasmere. The goal: raising funds for the charity Walking With The Wounded that helps rehabilitate ex-servicemen and women who are struggling with mental health issues, unemployment, and homelessness. The charity aims to provide these veterans with access to therapy and early intervention programmes to facilitate their return to society.

FDM has been a long-time supporter of WWTW and in particular the charity’s annual fundraising event, the Cumbrian Challenge. On 13 May 2022, 11 FDM teams from London, Leeds, Brighton and Glasgow travelled to Grasmere. Our intrepid travellers had some of the most creative team names including – Scrambled Legs, Not Fast Just Furious, Legs Misérables, and Super Troopers!

On Day 1, FDM teams drove or took the train up to Grasmere and assembled at our hotel to check in and get ready for the registration at the WWTW campsite later in the evening. This gave us a chance to get to meet everyone from the different FDM offices – it was great seeing colleagues, some of whom we’d previously only communicated with on Teams.

After completing our registrations and getting our safety briefings on Day 1, we heard from some WWTW staff and volunteers who shared their stories of getting involved with the charity. They were ex-servicemen who for various reasons had struggled to integrate into civilian life after service and WWTW had been the support they needed. Hearing their inspiring stories provided all the motivation we needed and reaffirmed our faith in aiding such a great cause.

Day 1 ended with all participating teams receiving maps for the trek that showed checkpoints along the routes and information about navigation and using a compass. This was followed by a hearty dinner and then we returned to the hotel for some much-needed rest before the big day.

On Saturday, 14 May all teams gathered in the WWTW campsite for an early breakfast. Properly bolstered, we made our way to the start line. There were three different routes to suit varying fitness levels: The Peak route, Tough route and Tougher route ranging from 10km, 26km and 32 kms. Each route had a different start time with the teams on the Tougher Route setting off at 7:15am, Tough Route teams at 7:30 am and Peak Route at 7:45am.

The WWTW website describes the Peak route as ‘perfect for participants who are on their first foray into the hills or are looking to gently ease back into the peaks.’ This 10-kilometre trail takes you over one peak and an ascent of 641M.

The Tough route takes you ‘up and down the hills to the west of Grasmere before sweeping down from the north along Gibson Knott’. This 26-kilometre trail covers nine peaks with an ascent of 1732M.

The Tougher route as the name suggests is the most challenging trail stretching 32-kilometres over 12 peaks and an ascent of 1885M.

We set off amidst loud cheers and encouragement from the crowds of service teams and volunteers gathered at the campsite. Our first challenge was about 100 yards away from the campsite: an exceptionally steep hill of 140M elevation. Armed with walking sticks, and backpacks strapped, we trudged uphill – some admittedly faring better than others – but everyone feeling that first burn nonetheless!

The top of that first climb felt like a mini victory in itself as we reached flatter ground, but our challenge had just begun. This was the start of our actual trail and required keen map reading and navigation. Neglecting maps and just following other groups was not an option as several teams found out… the hard way.

Carys Williams, a Recruitment Manager at FDM remembers how their team went ‘off-piste right from the get-go, having to sprint past the other teams to catch up…only to then go another 5k in the wrong direction up a waterfall and getting a phone call from the GPS people to turn around!’

The marshals positioned at strategic checkpoints along the route helped us with navigation and saved several teams from going off-route!

All along the trail, we were treated to the idyllic views of the lakes and the surrounding peaks and valleys. Whilst the Peak Route finished their trail by late morning, those on the Tough and Tougher routes still had a long way to go. What kept our spirits up?

Nat Rowland, Sales Manager at FDM ascribes it to ‘the general sense of camaraderie and the power of people. And that’s across both the Cumbrian Challenge as a whole, and the FDM community that went.’

One of the main checkpoints for the Tough and Tougher routes was at a car park in the plains where the cut-off time for teams was 12:30pm. Any team arriving after this time was asked to turn back. Here, we were greeted by Norman Yarwood, FDM’s Regional Head of the Ex-Forces careers Programme and his team. His assortment of treats provided a much-needed boost before the teams started the next leg of their trek – slated to be more challenging than the first one!

What followed was a series of peaks varying in elevation from 500M to an arduous 782M (for the Tough route). We walked over waterfalls, mossy rocks and wet marshy ground that looked deceptively solid. More than one of us got our legs stuck in a bog and had to stop to change shoes!

Alex Johnson, from Finance in FDM recalls, ‘We were fortunate to have amazing views. However, between the tops of the crags it was marshy with pools of water; so, I focussed on where best to step.  I jumped from one perilous stepping stone to another, seeing if I’d complete my traverse before the rocks ran out.’

This was also when the exertion started kicking in for some of us and was dealt with by chugging Lucozade and sweets from Norman’s tuck shop. There were medics and marshals at multiple posts on this leg of the trek, making sure everyone was fit to continue and giving us pointers on the route.

It was wonderful meeting independent trekkers along the way who cheered us on and motivated us with encouraging assurances of ‘not far now’ and ‘just a couple more kilometres’!

After a full day of walking around the Lake District, teams started making their ways back to the camp one at a time. Harrison Knee, Commercial Analyst at FDM Group says the tougher route was ‘beyond tougher than I could have imagined. In particular, the final 2K… never thought even walking down a road with a slight decline could be so painful – I’ll most certainly be doing more training for next year…’

The teams returned to the camp to great fanfare and revelry. The campsite felt like a festival ground and as each team sprinted across the finish line, they were applauded and cheered and greeted with their medals and beers! Stewart Sharman, Global Head of Ex-Forces, FDM says, ‘My highlight was the success of the FDM Festival Gazebo with DJ Dave Stewart in the Tent… The choice of songs from the hit parade were of course equally inspired – those Boots are made for Walking by Nancy Sinatra being a particular favourite…’

The evening saw great feasting (hog roast!), music and everyone having a good time. It was a proud moment for FDM when one of our teams – FDM Fubar was announced as the winner of the Peak Route in the award ceremony!

The Cumbrian Challenge was an experience of a lifetime in more ways than one. From testing our physical abilities to their hilt, to experiencing the very best that the Lake District has to offer, to bonding with colleagues in a completely new setting – we can’t stop talking about the trip!

Abbe Charlesworth, Academy Trainer at FDM Group, who successfully completed the Peak route said, ‘The kindness, bonding and teamwork at FDM is beyond describing, some of the best empathy and teamwork I’ve experienced. No one knew me but by the end of the weekend I felt, welcomed and now I know what’s involved I can start training for 2023!

The icing on the cake? FDM successfully raised £10,419 for Walking with the Wounded.