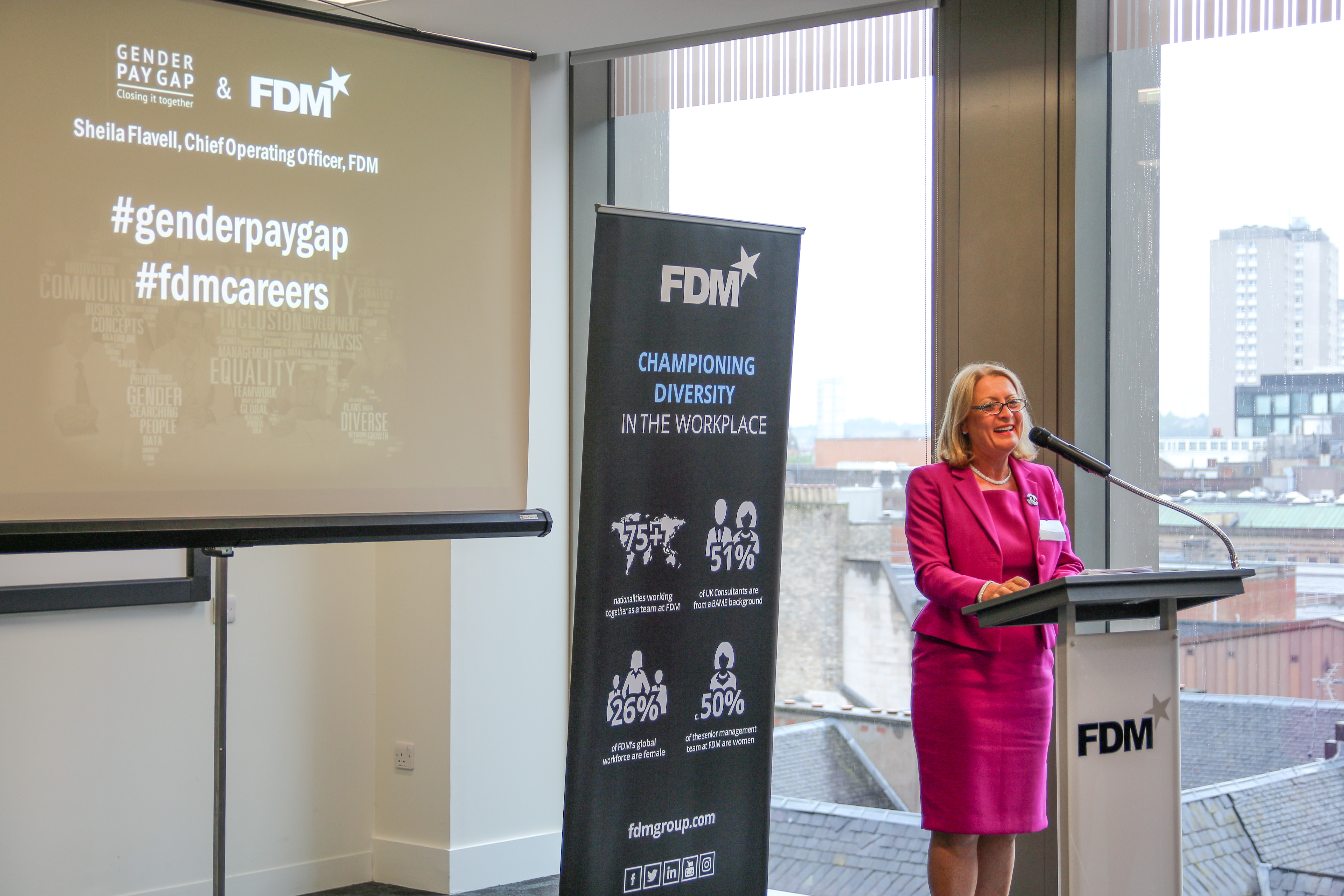 FDM became the sixth UK employer to release gender pay gap statistics in line with the Government’s new regulations which require employers with 250 or more employees to publish and report specific figures on their gender pay gap by April 2018. Following our early adaption of this reporting we have been hosting a series of seminars with the Government Equalities Office (GEO) to encourage other employers to report and share best practice to reduce the gender pay gap.

The gender pay gap is the difference between average earnings of men and women, expressed relative to men’s earnings. This year FDM has reported a 0.0% median pay gap and a 6.0% mean pay gap; this is significantly below both the median pay gap for the UK as whole and the technology industry with 18.1% and 19.1% respectively.

On 22nd June and 4th July FDM partnered with the GEO in our Leeds and Glasgow Academies to bring together business leaders and HR representatives from a variety of industries to discuss the reporting process and steps that can be taken to reduce any gaps. Having been treated to a networking breakfast guests were given an overview of the gender pay gap policy by Dan Coles, Head of Gender Pay Gap Team at the GEO. Dan not only highlighted the issue and the size of the current gap nationally but made recommendations to employers who may have large gap could take to rectify the situation. These included promoting flexible working for all; promoting shared parental leave and talking to your employers to understand barriers that limit progression.

FDM’s COO Sheila Flavell took to the mic to explain why we became an early adopter of gender pay gap reporting and the importance of diversity at FDM. Sheila noted that the decision to report early has been the easiest decision she has made this year as diversity is a fundamental part of FDM’s business model and culture.

‘We would be working towards gender gap equality regardless of the new regulations. Our model takes the best people, regardless of background and gives them the training and skills before placing them with our blue chip clients. By concentrating on talent rather than formal qualifications a diverse workforce comes naturally.’

The formal presentations were capped off by Duncan Brown from the Institute of Employment Studies. He praised FDM for the early adoption as well as the ease in which the HR team were able to produce the report. Having worked across a number of organisations and sectors Duncan highlighted a number of case studies which displayed interesting gender pay gap figures.

Sheila Flavell, Duncan Brown and Dan Coles were joined by John Palmer from ACAS for a panel Q&A. ACAS worked together with the GEO to create the reporting guidelines for companies. The panel heard questions from the audience on issues relating to the intricacies of the reporting with reference to salary sacrifice schemes, as well as organisations that have a large gap even though they have a strong gender parity at senior levels because they have large proportions of female administrative staff. The panel highlighted the voluntary narrative that can be included in the reporting. Each member of the panel encouraged people to do this, not only to explain any discrepancies specific to the industry or company, but also as a statement on what plans are being put in place to understand and eliminate your pay gap. Sheila added that communicating your report to your own workforce is key and highlighted the use of our internal newsletters, email and intranet to do so.

Gender pay gap reporting is not a stand-alone project and John Palmer noted that publishing this year is only the beginning on the journey; there will be ongoing benefits for organisations that can show progress year-on-year.