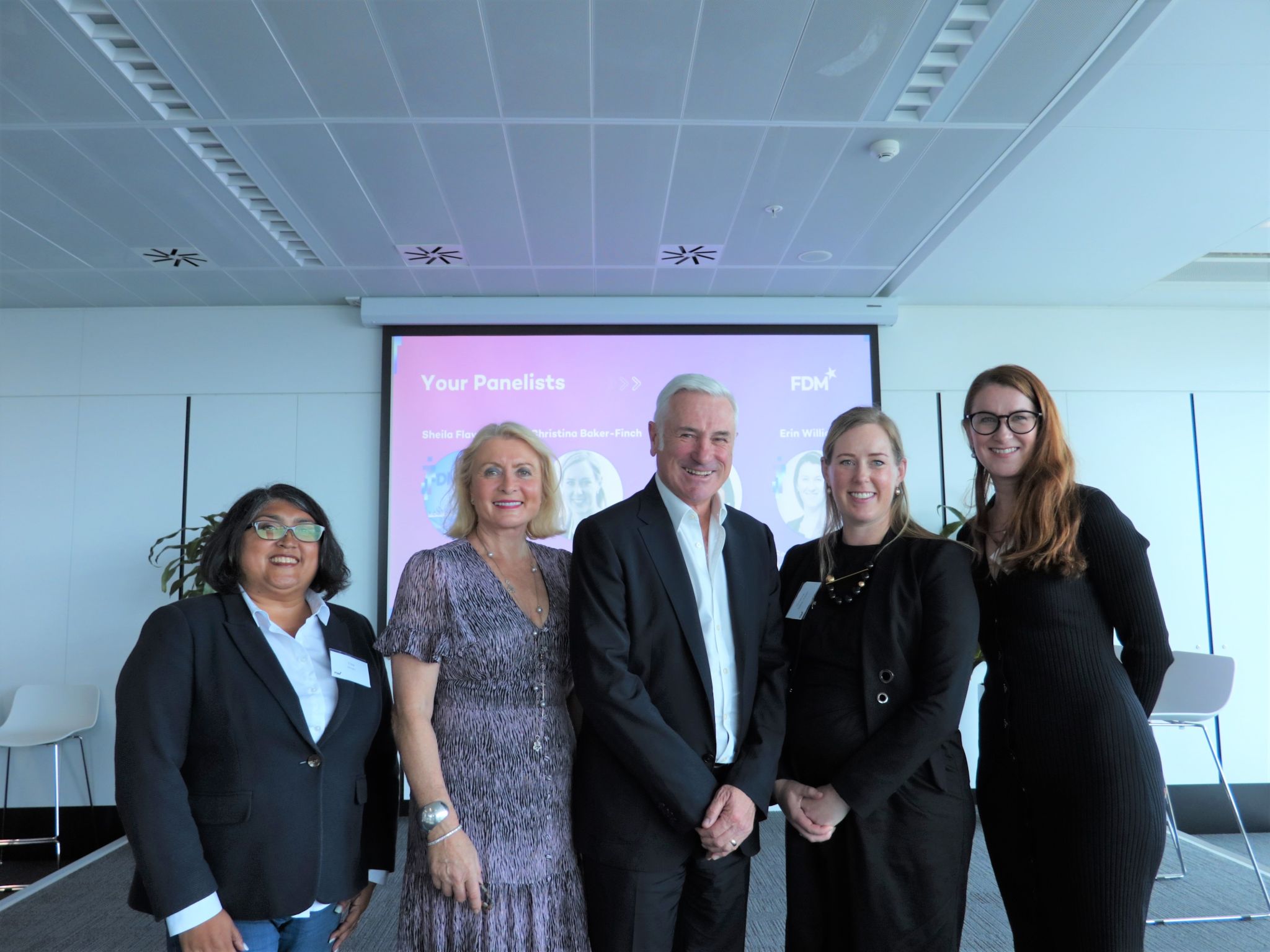 In October 2022, we held our second Women in Tech event - 50:50 Vision, The Future of Tech is Gender Equality. The timing coincided with the first visit in 3 years from FDM’s globetrotting CEO, Rod Flavell and COO, Sheila Flavell. Together, they rounded out an esteemed panel of female leaders in the tech world, with Rod adding a little gender diversity.

In October 2022, we held our second Women in Tech event - 50:50 Vision, The Future of Tech is Gender Equality. The timing coincided with the first visit in 3 years from FDM’s globetrotting CEO, Rod Flavell and COO, Sheila Flavell. Together, they rounded out an esteemed panel of female leaders in the tech world, with Rod adding a little gender diversity.

We are extremely grateful for the participation of Christina Baker-Finch from KPMG, Vilas Hirani from Deutsche Bank and Erin Williams from Salesforce who, with Sheila and Rod, brought ‘100+ years of combined experience in the tech space’, and provided a wealth of inspiring insights.

Together they shared what tech companies have been doing, what they should be doing and the progress yet to be made to achieve true equality. But also, the positive action that women can take as individuals to address issues like the ongoing gender pay gap.

Why this is an essential conversation

For some context on the importance of these issues we should have a look at technology’s gender landscape.

It’s estimated that around one in four leadership positions at large global technology companies in 2022 will be held by women. That represents roughly a 7% increase from 2019 – steady progress, but slow. In Australia the average female proportion within the overall tech workforce is around 28%, with leadership roles seeing the fastest growth.

But on a purely practical level, it’s still a wonder that it isn’t even quicker. As our panel pointed out, it has been well documented that companies where 30% of leaders are women have a 15% increase in profitability compared with similar firms with no female leaders.

How does FDM compare? Sheila joked that, from day 1, FDM had a 50:50 gender split in senior management. At first, that was because there was only Rod and Sheila on board, but the aim has never changed.

At the time of writing, our women in technology stats are that 31% of FDM’s global workforce are female, 55% of the FDM Management Team are female, 33% of our Board of Directors are female and we have a negative median gender pay gap of -9.6%.

Men and women should, quite simply, receive equal pay for work of equal or comparable value. So, why is there still a significant gap in pay, and representation, between qualified men and women in the IT space?

Technically, it is unlawful to pay two people differently for the same work. There are a number of factors influencing the disparity, many based in myth, eg:

Of course, the ideal is when companies create a culture that promotes gender pay equity. Beyond being best practice, there are numerous benefits - not least of which is attracting and retaining top talent.

As Erin said, hopefully we’ll soon be looking back and be amazed that these are conversations we were still having.

The Australian Bureau of Statistics reports that, in June 2022, over 25% of couple families with children aged 0-4 years have both parents working full-time.

Two of our morning’s panel were intimately familiar with the challenges of growing a career while growing a family. Christina is soon to take advantage of KPMG’s parental leave provisions and Erin already with a few years’ experience.

Sometime before starting a family Erin approached her then manager, a man, with the idea of drafting a birth plan. His response was something like, “you’re not pregnant, are you?” “No”, she replied, “it’s a plan.” Erin was talking about more than maternity leave; she meant a plan to incorporate her becoming a mother while maintaining her career path. Her boss had never heard of such a thing – and a plan was duly drafted.

Australia’s parental leave entitlements, incidentally, have evolved over the past 50 years. The first formal provision for maternity leave was the Australian Public Service Maternity Leave Act, 1973, providing 12 weeks paid leave with a maximum total of 52 weeks.

This public service entitlement extended to 12-months unpaid maternity leave to all permanent workers in 1979. In 1990, the primary care giver could be the father, with a potential 2 years of unpaid parental leave.

Today, parents in Australia are entitled to 20 weeks of paid parental leave at a flat rate - the federal minimum wage. This does not compare too well on the world stage, with 31 of the 38 nations in the OECD offering longer paid maternity leave than Australia. (Slovak Republic, Finland and Hungary all more than 160 weeks.) (Although, USA: zero.)

But the main concern is resuming a career after a break. And this is a subject dear to Sheila’s heart. She is especially proud of FDM’s Returners Program in the UK which has been set up to provide professionals who have a taken a career break with the skills and confidence to step back into respected roles in the workplace. Launched about 7 years ago, the program is currently restarting over 120 careers every year, predominantly for women.

Why aren’t there more women in tech?

The gender gap in the technology workplace has many potential causes. Even from a very early age it can be very difficult to shake society’s ‘expectations’ for gender roles.

Erin told us the story of how she enrolled her primary school-aged daughter into a robotics class. The news was not greeted very enthusiastically, as “there were only boys doing the class” and needed some hard-sell persuasion tactics around building a robotic piggy bank which counted the money. Once her daughter started, however, she loved it and couldn’t wait until the next week.

But, despite girls doing at least as well as boys in STEM-related topics at school – particularly mathematics, this isn’t translating to equal participation in the tech workspace.

There are certainly barriers to women breaking into STEM fields, from unconscious bias at university: men having more ‘natural talent’ – to out-and-out “boys club” sexism in the workplace. Or simply a lack of female role models and mentors - you can’t be what you can’t see.

A crucial step towards gender equality is advancement in the recruitment process.

The panel reminded us of the oft-quoted statistic from a Hewlett-Packard survey that women only apply for jobs for which they believe they meet 100 percent of the required qualifications. Whereas men will happily apply for the same jobs when they feel they meet only 60 percent.

If equally talented people aren’t responding to equal opportunities, something  needs to change. As Rod said, sometimes it can be simply changing almost unconscious behaviour, like the language used in job descriptions or during the interview process, that can make important differences in the move to gender equity. Obviously avoiding gender specific words – he/his – but also aggressive, masculine terminology. Asking for “coding ninjas” could be a strong deterrent, while “adaptable problem-solver” could attract a highly competent female candidate.

Diversity in tech is everyone's concern

Unconscious bias, that subtle but persistent view that women are somehow less technically inclined and able, is not imagined. All the female members of our panel have experienced being the ‘invisible’ person at the table. They’ve seen that women still need to perform much more just to prove themselves in the workplace.

In the tech world, where "bro culture" dominates the landscape, acknowledging gender bias is the first step toward addressing the problem. The companies that are progressing are taking a hard look at their own preconceptions and drawing plans to counteract them.

For more women to step into tech leadership positions, they first need to know that these opportunities exist. It starts with educating them early about the career and learning options they have available. When they gain both the interest and skills to succeed in tech from a young age, they are primed to excel in STEM careers.

“FDM supports the continuing number of female students and graduates entering the tech industry through the implementation of FDM’S Women in Tech Initiatives, such as female only digital bootcamps, women’s development, CV best practices and interview technique. In addition, FDM’s involvement with the subject of inclusivity addresses more than the gender gap. Our Elevate and Pride Employee Networks welcome people of all genders, as well as those identifying as part of the LGBTQIA+ community. We place importance on the safety, wellbeing, and morale of all our employees while providing an encouraging environment to attract and retain female talent.”

At FDM, we believe everyone should have an equal opportunity to belong and grow in their career. In our 30-year experience within the IT industry, we have seen many of our female consultants going above and beyond to do amazing work in the tech space. Discover your own unlimited tech career possibilities with The FDM Graduate Program – our committed team will support you every step of the way.