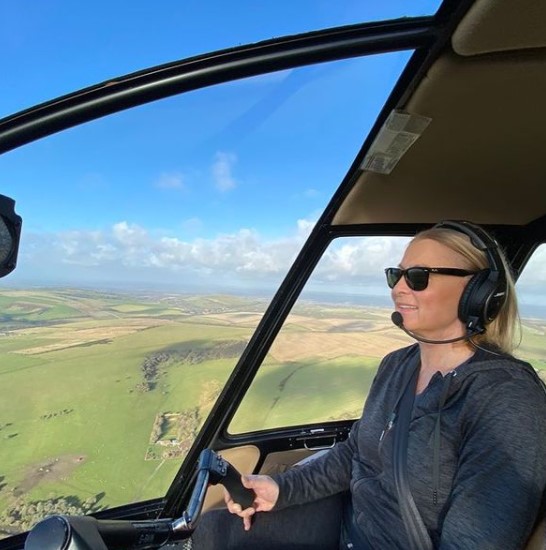 “In the summer of 2019, my husband Rod and I decided to cycle the 20 or so miles to Shoreham Airport. We pumped the tyres up, put helmets on, and off we went. Within 5 minutes he had shot off at a pace I couldn’t match and was out of sight for the duration of the journey.

Realisation dawned that I was no longer as young or fit as I used to be and the years were marching on. In my head, I was the same person I was at 25, but the body was clearly telling a different story. After what seemed like an eternity, I arrived at Shoreham Airport and was extremely pleased with myself that I had completed the first leg of my journey.

Something there was about to happen that I had never planned or expected! As I negotiated the speed bumps in the road outside the main airport terminal building, I saw a sign which read ‘ADVANCE HELICOPTERS’. There was a friendly chap behind the desk whom I introduced myself to. The conversation went something like - “Do you teach people to fly helicopters?” ‘Yes” “Is there any upper age restriction?” “No.” “Sign me up. I will be in tomorrow.”  And that was how I got into helicopter flying. It was as simple as that.

Let me be clear - there is nothing easy about helicopter flying. The exhilaration of being in the air was often tempered by the frustration of trying to perform the various tasks and master the many steps required to pass my final test to allow me my Private Pilot’s Licence (PPL).

Hovering was a nightmare. The helicopter was swinging about like a pendulum, making me feel both anxious and nauseous at the same time. It took me 10 lessons to master the art of hovering. There were times when I never thought I would ‘get it’, but then I did, and now I wonder what all the fuss was about. It’s a bit like learning to swim or ride a bike, one day it just clicks.

On the 31st December 2019, the moment arrived and I was to perform my first solo flight. What if I forget what to do? How is this going to work out? I pretended my instructor was still sitting next to me, so I talked to this imaginary person all the way there and back which kept me sane and in control.

On the day of my final test, I didn’t tell anyone just in case I failed. I had worked so hard to get to this point I just had to concentrate, keep the nerves at bay and get through it. Before taking off with my examiner, I had to walk him around the helicopter to explain the complexities of the engine. This was something quite alien to me as I have never really seen under the bonnet of a car and barely know how to top up the oil. Nonetheless, effort equals result and the work I had put in allowed me to pass this part of the test.

An hour and 45 minutes later, I arrived back at the Advance Helipad to be congratulated on passing my PPL! I was ecstatic. Who cares if everyone overtakes me on my bike and I jog really slowly these days - I am a qualified helicopter pilot now. Age is not a limiting factor and I want to go on and enjoy many years of flying. I have now completed 140 flying hours and these days I fly off to pubs and restaurants up and down the country with friends and family. Last weekend I took my 92-year-old mother up after much objection from her. She said she felt so safe it rocked her to sleep.

I still go cycling and no longer care that I can’t keep up with Rod. He is now learning to fly and soon, when he passes his PPL, we will be able to share the workload as we travel the air together."