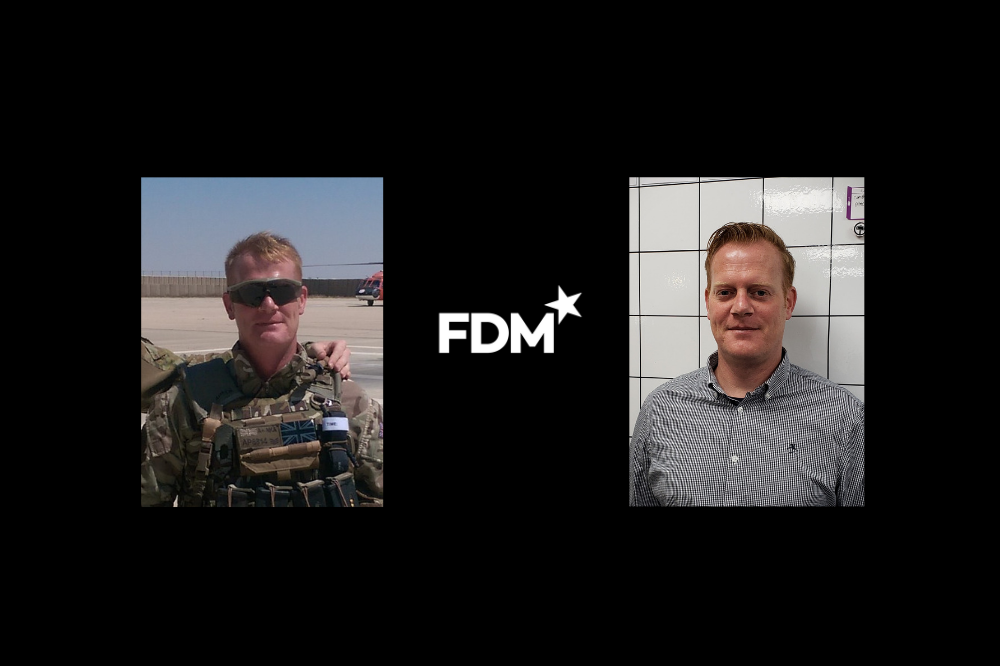 FDM’s Ex-Forces Programme focuses on transforming ex-servicemen and women into IT and business professionals. The programme is specifically designed to provide service leavers with expertise, training and commercial experience, bridging the gap between the Forces and the corporate world.

I served just shy of 10 years in the British Army, initially in the Royal Artillery and finishing in the Intelligence Corps. My military career was varied, to say the least. After leaving in October 2017, for the first time in a decade, I found myself lacking direction and unsure what steps to take next.

I spent a year kicking about, working on a couple of projects that were very similar in substance to the work I did at the tail end of my military career. I realised that I was holding onto a life that I had chosen to leave behind. It wasn’t healthy, and I needed to make a change. I spoke to one of my brothers, Nick, who was a former Royal Tank Regiment officer, and he told me about FDM Group and their Ex-Forces Programme. He had been through the programme himself and it removed any lingering doubt from my mind. I attended an Insight Day in December 2018 and I returned for an assessment the following week and started the Ex-Forces Advanced Course in January.

The course was difficult at times, yet enjoyable throughout. The learning was focused on project management and was supplemented by great advice and guidance from the Ex-Forces Team, all of whom are veterans and all of whom are ready to pass on the valuable experience that they have gained in the commercial world. I found this insight very helpful and now often quote their stories and sayings to others.

Upon completion of the course, I was placed with a client in Cardiff as a Scrum Master. The working environment is relaxed and provides fertile ground for innovation and improvement. I've taken on the role of a leader of a team of FDM graduates, supporting them as they find solutions to complex problems. It is a completely different way of working for me and taking that step back requires courage and commitment, as well as the toolkit of transferable skills that I brought from the military; skills that FDM showed me how to adapt for use in the outside world.

The FDM Ex-Forces team helped me to finally bridge the gap between Military and Civilian Life. They had my back from the first day I walked in the door, and among other things helped me by:

Discuss your options with a member of the Ex-Forces Team at FDM today at [email protected].