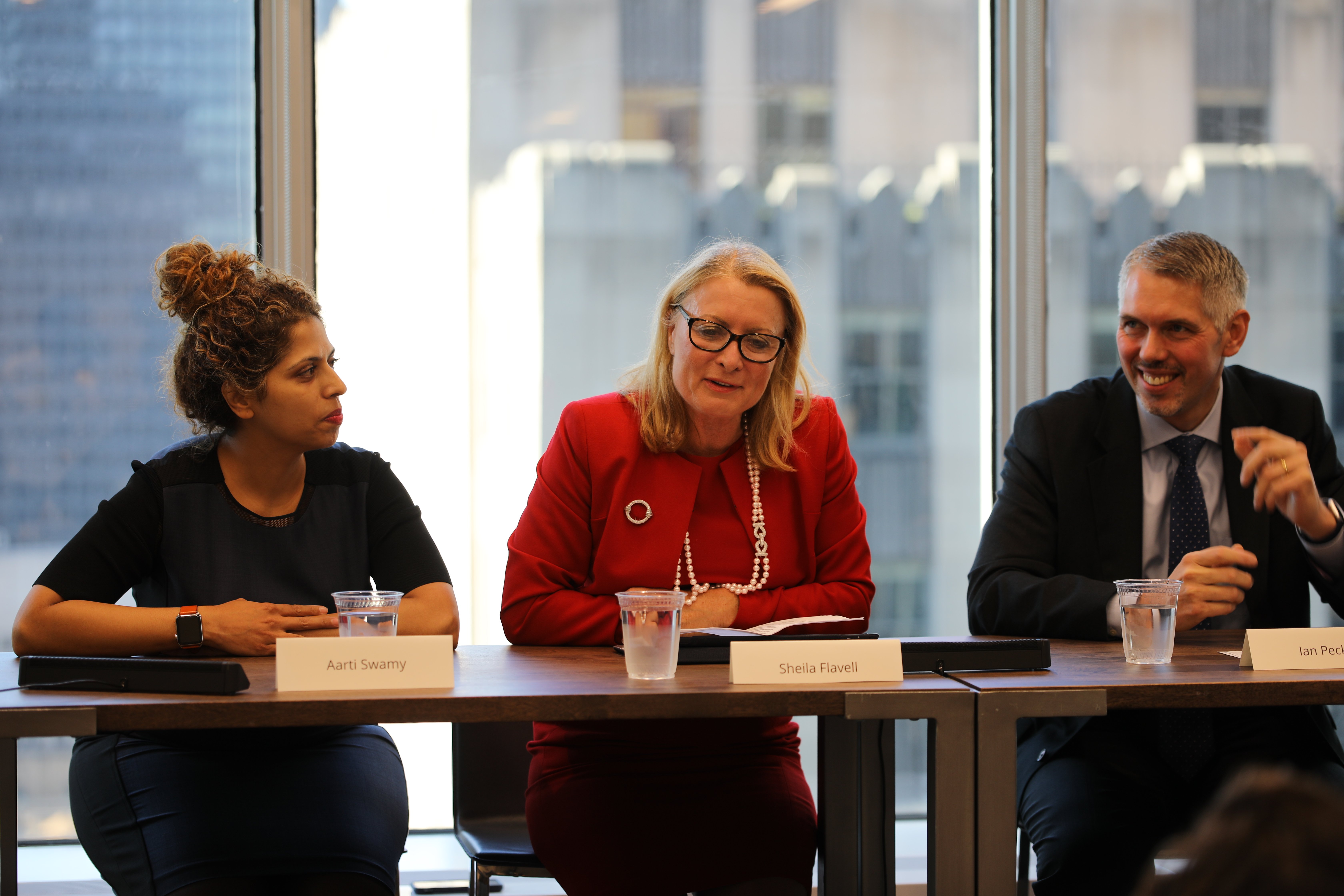 FDM is a global company that is inclusive by nature, with circa 50% of our senior management team made up of females, circa 60% of our US consultants are from a minority background, complete with over 75 nationalities working together as a team. However, in the tech world, we know that a significantly larger group of males study STEM subjects than females, and these numbers drop even lower when you look at minority ethnicities. In spite of these statistics, many executives and company heads are doing their part to combat these numbers.

On Friday 5th October, our New York centre hosted a panel discussion in partnership with our esteemed client Neuberger Berman to discuss the challenges and benefits of diversity and inclusion in hiring practices today. Our panelists included Sheila Flavell, COO and Executive Board Director of FDM Group, Ian Peckett, Managing Director & CTO of Neuberger Berman, and Aarti Swamy, COO, GTB Cash & Messaging Operations of Deutsche Bank. These individuals came together to discuss how to create a more diverse workforce, primarily by identifying strategies to make hiring practices more inclusive. As our moderator Nabila Aydin, VP of Global Marketing Operations at FDM Group pointed out, “Focusing on diversity and inclusivity is the smart thing to do in business, it’s just good business sense.”

The statistics that accompany our current workforce can be shocking—there are only three African-American CEO’s and 25 female CEO’s currently in the Fortune 500. Merely 1% of board members of Fortune 1000 companies are women.

FDM has been a diverse organization from the start. Sheila joined the company as the first female employee, came from a less than privileged background and didn’t earn her degree until she was in her 40s. FDM has a number of initiatives in place to challenge the workforce of today by implementing programmes such as our global Women in Tech Initiative, our Getting Back to Business Programme and our Ex-Forces and Veterans Programmes. FDM also hosts internal equality, diversity and inclusion workshops regularly to raise awareness of different D&I topics and get people debating and discussing with colleagues of different departments of ways to overcome unconscious bias and lack of diversity.

During the panel, Sheila made the important point that, “academic intelligence doesn’t equal brilliant techies.” Instead, FDM makes the most of its strength-based interview process, which focuses on asking candidates what they want to achieve rather than what they already have. All of the FDM recruitment teams have received unconscious bias awareness training and at least three people interview each candidate. Assessors also do not see the candidate’s resume during the face-to-face interview stage, and use strength-based interview questions to give all applicants a fair chance.

“Our teams are structured so we have differences in opinion,” commented Ian of Neuberger Berman. “We encourage a diverse and inclusive executive team not just culturally, but one that has the power of cognitive diversity as well.”

Neuberger Berman works with vendors and recruitment partners to ensure they are aware of the importance of diversity in hiring tactics, as well as implementing advocacy programs for underprivileged groups and encouraging them to pursue careers in business and tech. The company also spearheaded a diversity initiative program with an “Advocacy Walk” of breathtaking artwork around their midtown office, which features female and minority artists and gives them a platform for their art to speak out.

Aarti Swamy of Deutsche Bank mentioned the significance of companies doing their part to change this lack of inclusivity at society level. This is done by reaching out through schools to counter the masculine image that STEM careers are often given. Aarti also discussed the lack of inclusivity seen in job ads or postings. Editing job descriptions so they are more inclusive is a simple and easy way to allow more diversity in hiring practices. Rather than using words like “mandatory” or “required” when discussing certain skills, descriptions should instead use terms such as “preferred.” Also, instead of describing roles as “fast-paced” or “aggressive,” something like “collaborative” is a more inclusive option.  FDM’s CEO Rod Flavell jumped in to suggest a way to use language as a tool to help bring in diverse candidates—simply by advertising in a language that is more familiar to them rather than Standard English.

When asked about how the present companies use strategies to retain diverse individuals and pull them through to higher executive positions, Sheila referenced a common phrase within FDM, “If you can see it, you can be it.” If an employee sees a role model of theirs that they can easily relate to in an executive role, it motivates them to get up there themselves. FDM is sure to encourage individual learning paths, as no one is restricted in terms of opportunities due to things like race or gender. Aarti took it a step further; “there are role models out there who just watch out for themselves, but it is their duty and responsibility to look out for junior employees. If women want to see themselves up there in the higher level roles, we have to help each other get there.”

One way to ensure that women “get there” is through quotas. Quotas are a concept worth debating, especially when new legislation that’s been passed in California was discussed, which requires publically traded companies to have at least one women on their board of directors by 2019. “While no one wants to be the ‘token’ female,” Sheila began, “sometimes it is necessary to implement quotas to push the dial forward and get women a seat at the table. If it takes quotas to get women on the board, so be it.”

Fight the fight with us by applying and starting your career in tech today.

My Co-op Experience at FDM