French Inventor Crosses English Channel After falling into the waters of the English Channel in late July during his attempt to cross the landmark, French inventor Franky Zapata has successfully become the first person to cross the body of water on a flyboard as of this Sunday. Zapata’s notable accomplishment was powered by his Flyboard Air, his hoverboard-like invention that is powered by five small jet engines fuelled by kerosene, according to the BBC.

After falling into the waters of the English Channel in late July during his attempt to cross the landmark, French inventor Franky Zapata has successfully become the first person to cross the body of water on a flyboard as of this Sunday. Zapata’s notable accomplishment was powered by his Flyboard Air, his hoverboard-like invention that is powered by five small jet engines fuelled by kerosene, according to the BBC. 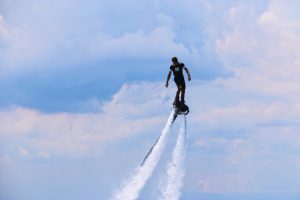 Zapata's previously unsuccessful attempt was marred by his struggle to switch his refuelling pack. He successfully navigated this during his Sunday trip thanks to a large boat and three escorting helicopters. The Guardian reports that Zapata began his flight in Sangatte in the northern part of France’s Pas de Calais region and travelled 22 miles (35.4 km) in 22 minutes, reaching speeds ranging between 106 and 110 mph (170 km/h-177 km/h) during his journey.

The inventor gained popularity during Paris’s annual Bastille Day parade in mid-July, where Zapata participated in a military display on his flyboard. After three years of hard work, Zapata’s efforts have paid off. The BBC reports that the French military has granted Zapata’s company, Z-AIR, a €1.3m ($1.4m; £1.28m) grant to help develop the technology for the military.

This week, New York City got its first taste of what life will be like with autonomous vehicles (AVs). Optimus Ride, a self-driving vehicle technology company, launched several electric vehicles on a mile-long, private route from the entrance of the Brooklyn Navy Yard to the New York City Ferry Dock on the East River. The New York Times reports that the self-driving shuttle vehicles are free to use and will operate seven days a week to assist with transporting passengers to and from the ferry landing. According to The Verge, each autonomous vehicle still contains two drivers; one behind the wheel and another monitoring the sensors of the six-seater van from the passenger seat. In the future, Optimus Ride plans to go fully driver-less with engineers monitoring every vehicle, ready to issue necessary commands in a problematic situation. Each vehicle that Optimus Ride is currently testing on the private property of the Brooklyn Navy Yard is fully electric and equipped with three LIDAR sensors and eight cameras. The self-driving shuttle travels at about 15 mph with a max of 25 mph, according to the BBC.

The Navy Yard is the perfect location for Optimus Ride’s AV deployment – far away from the unpredictable city streets and located on private property. This gives the company’s CEO, Ryan Chin, the ability to refine his technology while the public gets comfortable with the AV concept in New York City. NPR reports that Hawley’s bill suggests banning specific features used on several social media platforms that make them addictive, including infinite scroll and autoplay. What would that mean for users? An end to the automatic loading of the next YouTube video, actively refreshing your news feeds, and the ceasing of the “snapstreak” feature on Snapchat. The incentivising nature of rewarding users for continued use is one of the main elements Hawley’s SMART bill would target.

Additionally, the bill suggests including in-app “stopping points” to inform the user of how much time they’ve spent on the app, according to CNet. According to NPR, Senator Hawley is aiming to discourage continuous social media use resulting from the manipulative tactics of social media companies. A previous attempt of Hawley’s to challenge these companies includes his open letter to Mark Zuckerberg this past May, accusing him of allowing Facebook to monetise private data.

If you enjoyed this article, check out more of our This Week in Tech News blogs: