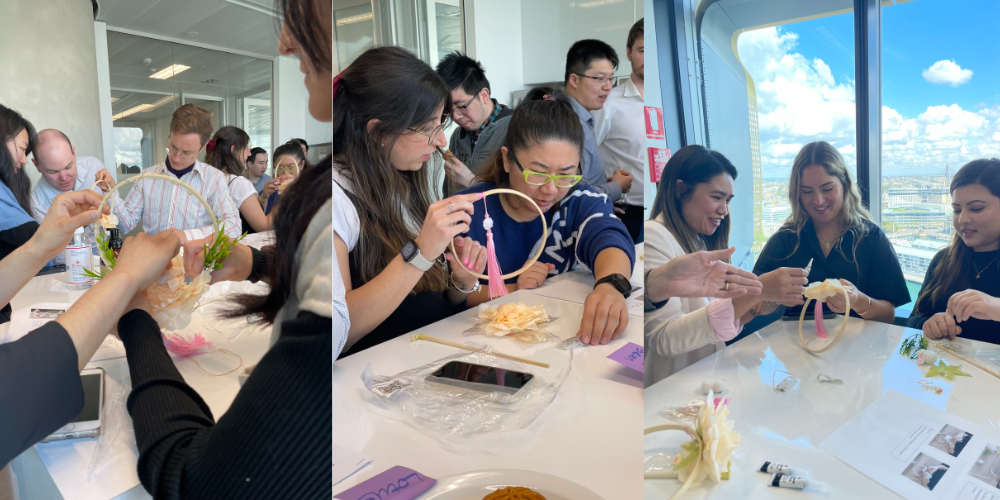 Mid-Autumn Festival is one of the most important holidays in Chinese culture. We celebrated the festival across our global FDM centres and learnt of its fascinating origins.

The Chinese Mid-Autumn Festival, also known as the Moon Festival or Mooncake Festival, is a traditional festival celebrated in Chinese culture. Similar holidays take place in Japan, Korea, Vietnam, and other countries in East and Southeast Asia.

FDM offices in Singapore, Hong Kong, Sydney and London also celebrated the occasion, learning the history of the festival and its significance, lantern making and, of course, eating mooncakes!

The Origin of the Mid-Autumn Festival

It is called the Mid-Autumn Festival because it is held on the 15th of the 8th lunar month in the Chinese calendar around the autumn equinox.

Enjoying a popularity similar to that of the Chinese New Year, the festival is one of the most important holidays in Chinese culture with a history that dates back over 3,000 years.

As long ago as the Shang Dynasty (c. 1600–1046 BC) Chinese emperors worshiped the moon in autumn to thank it for the harvest.

The festival’s origin is also associated with the popular legend of Chang’e, the goddess of the moon.

Chang’e’s husband, Hou Yi, was an accomplished archer who shot down nine of the ten suns and saved people from their fierce heat. He was rewarded with an elixir of immortality which he did not drink because he could not face immortality without his wife. So, he asked Chang'e to keep it safe for him.

One mid-autumn day, while Hou Yi was out hunting, an evil person tried to steal the elixir. To prevent losing it, Chang’e swallowed it herself and flew up to the moon as her immortal home from where she could look down on her beloved husband.

Along with this legend, the custom of worshipping the moon on Mid-Autumn day has been passed down from generation to generation.

As the second most important festival in China, Mid-Autumn Festival is celebrated in many traditional ways.

The festival has long been a time to mark the successful reaping of rice and wheat with food offerings made in honour of the moon. Today, it is still an occasion for outdoor reunions among friends and relatives to have dinner together on the evening of the Mid-Autumn Festival and observe the Moon, a symbol of harmony and unity.

Making and sharing mooncakes is one of the most recognisable traditions of this festival. Usually round to resemble the moon, these rich pastries are typically filled with sweet-bean, egg yolk, meat or lotus-seed paste. Sharing and eating mooncakes among family members during the week of the festival signifies the completeness and unity of families. At FDM’s Sydney office, staff enjoyed sampling mooncakes with lotus, red bean and taro fillings – yum!

It’s hard to say how and when lanterns became associated with mid-autumn though it seems they have traditionally been used to symbolise fertility. Today the lantern is seen as one of the essential elements of the festival. Lanterns of all shapes and sizes are carried and displayed as symbolic beacons that light people's path to prosperity and good fortune. Some Chinese people, in countryside areas, light lanterns that fly up into the sky, releasing them like prayers of dreams coming true.

FDMers got crafty together, making adorable lanterns featuring Jade, the rabbit that joined goddess Chang’e on the moon.

We are proud to support our diverse community. We celebrate difference because we want everyone to have equal opportunity to belong and grow in their career.

FDM has over 5,500 employees from varied backgrounds. With 95+ nationalities working together as a team, FDM has firmly established itself as an inclusive employer that champions diversity in the workplace.

We believe that cultural inclusivity is a win-win for companies and employees alike. We discuss three reasons why businesses should work towards achieving an inclusive workforce in this blog.

How to Improve Diversity in Recruitment